Jackson Shaw put up a few posts recently on Microsoft's plans to acquire Sentillion, and throws out a few questions.  In a nutshell, Jackson makes a great point that this acquisition was probably driven by Redmond's Health Solutions Group rather than their traditional identity management team (whose product was formerly known as ILM, now Forefront).  Here are a few of my thoughts that supports that point.

1. The healthcare IT market is pretty unique, and healthcare specific software tends to take precedence over the larger generic software providers.  This has caused 100's (if not 1000's) of applications within a typical healthcare IT environment.  Healthcare IT shops want to buy software from companies who understand them (with doctors in the exec board), and they'll pay top dollar for the special attention.  For example, McKesson brought in over $100b in 2008 vs. Microsoft's $60b in all verticals.

2. Until about the mid 2000's, Microsoft's healthcare strategy was pretty bad. They might disagree with me, but anecdotal evidence suggests that they were trying to sell generic technology (like BizTalk, SharePoint, etc.) with a healthcare twist.  In my opinion, that approach caused them to lag in healthcare, and was a major cause of complaint for Microsoft's healthcare account reps that I had dealt with in the past.

3. In 2005, Microsoft hired Peter Neupert as VP of their Health Solutions Group.  Prior to that, Peter was the CEO of drugstore.com, and co-chair'd the healthcare IT committee for the President's IT Advisory Committee. In 2006, Microsoft acquired Azyxxi, a healthcare app that pulls and displays patient info from disparate sources, and competes with the Cerners and McKessons of the world. Good move.  (They also brought over a doc with the acquisition to lead the software team!)  They followed that up with the acquisition of Hospital 2000 by GCS, then Rosetta Biosoftware and the launching of HealthVault.  At HIMMS 2008 in Orlando, Microsoft renamed their healthcare line 'Amalga'.

4. In line with their seemingly new strategy of going more vertical, this past June - Microsoft signed a licensing agreement with Sentillion to supply Sentillion's SSO and Context Management technology as part of Amalga.  A few days ago, Microsoft announced its plan to acquire Sentillion.

All of the above echoes Jackson's points that the acquisition was most probably a healthcare play more than anything else. That being said, that doesn't necessarily mean confusion for the field sales folk.  Also, that doesn't necessarily mean that Sentillion's technologies can't be used outside of healthcare.  In my opinion, clients outside of healthcare aren't as picky, and Microsoft could use the ESSO capabilities for non-healthcare clients.

Thoughts About Microsoft's Approach to Rationalizing the Stack

Sentillion's flagship product is Vergence, or their clinical workstation product.  Basically, it's an ESSO solution with Context Management added in.  Other pure play ESSO vendors put some downward pressure on the market, forcing Sentillion to launch an ESSO only product named expreSSO.  Finally, proVision is their User Provisioning play. (They also have a desktop virtualization product that doesn't fall into the traditional IDM stack.)

Microsoft's Forefront (formerly ILM) started as a metadirectory product.  They added certificate management, and in in the latest version, workflow capabilities.

Architecturally, the only overlap between the product sets are the provisioning workflow engine and the connectors.  Regarding the connectors, Sentillion has taken a pretty unique approach.  They've extended their Bridges technology which "monitors and controls the user interface of targeted applications as though they were the end users of those applications." In a way, they've extended the 'end user emulation' approach of ESSO to the provisioning world. (Whatever you do, don't say 'screen-scraping'. They find it offensive.)  Joking aside, the approach actually makes sense for healthcare institutions where there are a myriad of applications, no backend standardization, and almost definitely no APIs.  Sentillion even has a point and click wizard to create more connectors based on their Bridge technology.

On the other hand, based on what I've seen of ILM2 (now Forefront), its provisioning workflow capabilities are more sophisticated than Sentillion's.   I'm imagining a scenario where Microsoft can use Forefront as the core provisioning platform, and develop a customized connector that serves as a wrapper to Sentillion's Bridge technology.

Either way, a small amount of integration could go a long way for Microsoft.  They could already make in-roads into healthcare accounts by using Sentillion's name, and strengthen its capabilities with Forefront's workflow engine and data synchronization capabilities.  On the other hand, non-healthcare clients can benefit from Sentillion's ESSO product.  Anyhow, knowing Microsoft, even if integrating the 2 products is in their cards, it's not going to happen anytime soon. 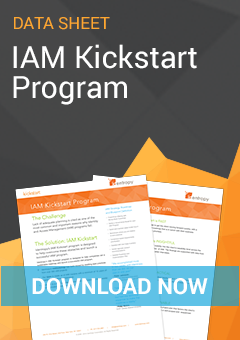 I’ve been in the identity space for most of my career, and I’m still passionate about it. Anyhow, a CTO is supposed to be the person who sets technical vision for the company, but honestly – Identropy has way too much brainpower for a single person to do that. Instead, I get my hands dirty with the customer development process, lend a helping hand wherever its needed, and I have the privilege to talk identity with some of the brightest minds in this space every day.